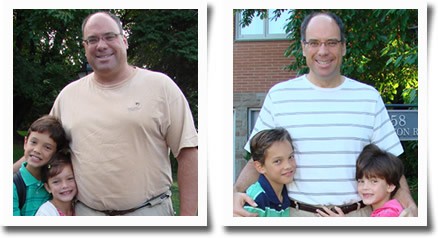 I looked at the notes on my physical from my doctor every year and was always shocked to see the words “Morbidly Obese” written on it. “I couldn’t be”, I told myself, “I’m an athlete!”. But for years, I had always been told, “You don’t look that fat”, “You carry it well”, “You’ve always looked big” and my favorite “You are the healthiest fat person I know”.  It hit me one day, Labor Day 2008, when I looked at the scale and looked at myself in the mirror, that I was not “athletic” anymore (unless that is Sumo wrestling or a football offensive lineman).

When I was an athlete in school and college and after, I could eat nearly what I wanted because I was always in shape.  I had a weight issue when I didn’t exercise and so I kept exercising and it made me a “healthy fat person” as my doctor and others described me.  I guess it snuck up on me from eating what I wanted without the same amount of exercise as I was once able to do.  Life had changed but my eating habits hadn’t.  Sure, I had high blood pressure that was under control with a reasonably low dose of a medication (And I kept telling myself it was genetic since I had a family history), and I had sleep apnea that was under control with my Bi-PAP machine (which I had thought I had always had but it had not been diagnosed before).  Otherwise, I was healthy.  But when my younger brother had hip reconstruction surgery and my college roommate and friend had a 95% blockage in an artery requiring a STENT to be put in, I got to thinking that I needed to take my health and in particular, my weight more seriously.

I usually could cut weight by cutting down how much I ate and what I ate.  As I said, I always exercised so that helped some.  But when we returned from Labor Day Weekend, I weighed in at 311 lbs., not my heaviest (324) but well up there. So, I started to watch what I ate and how much.  And I dropped about 16 lbs.  But I got stuck again, about where I usually got stuck.  I realized that 16 lbs. was but a drop in a very large bucket and as I approached my 49th birthday, with a 9 year old and 5 year old, I needed help to get down to a healthy weight.  Around the same time, I was having sinus problems and while I was in seeing my ENT, he told me about Dr. Scinta and arranged for me to go to an orientation with her.  After doing that, my wife and I talked about it.  This was about my long-term health and avoiding something more serious later on.  So, I dove in, and made myself my ‘project”.

Now, since November, I am down 72 lbs. from when I first started working with Dr. Scinta and about 88 lbs. from Labor Day of last year.  Many people don’t realize how much I’ve lost.  They think I’ve lost 40 lbs or so.  Maybe I did “carry it” well.  The really important part is that my health is better for the long-term.  My pulse is around 48, down from 62, my cholesterol is 135, down from 211 and my triglycerides are 45 down from 242.  I’m off all medications, including the blood pressure medications I had been on for the last 15 years and finally off the Bi-PAP machine that had been my constant companion for the last 4 years.  My body is set up for the next part of my life when that weight I was carrying would have taken its toll.  When people ask me how I did it, they are hopeful that I will tell them of some magic drug or secret food that I ate that took off the weight.  So, sometimes I do tell them that it was a strict diet of fast food and watching TV, because many of them are hoping it can be done easily and with little change.  Of course, it can’t.  The “fast food” was the quantity of Optifast shakes and bars I ate over the last 8 months and the TV is the amount of television I watched while exercising religiously on my rowing machine every day (and sometimes twice a day).  Since November, I’ve rowed nearly 5 million meters and walked over 2 million steps.  I feel good, I sleep better and I have a sporting chance to keep up with my kids again.  And as I approach my 50th birthday, I don’t feel middle-age anymore.