You may be aware that I recently returned from the European Council on Obesity (ECO) conference in Prague.  The purpose of the conference was to get to meet my European counterparts (I will be the president-elect of the American Society of Bariatric Physicians in the fall) and to share our experience in treating obesity in the U.S. with my colleagues in Europe.  From my observations in Prague, there were no packaged or processed foods. Everything we ate during my trip was freshly made and locally grown. Prague pork for example – is cooked on the street before your eyes.  It is often served with potatoes and saur kraut and, well…beer.

Other traditional foods include goulash (pork based of course) and schnitzel which is served with….well, beer.  In fact- nobody asks for water, and it is hard to get at restaurants. You are given a teeny, weeny 4 oz glass of water, but a big heaping mug of Pilsner beer- it is almost assumed that you will drink that instead.

Czechs in Prague walk a lot- on the beautiful hand-laid, cobblestone streets.  And the gorgeous Czech women are willing to risk a twisted ankle to sport a short skirt and high heels. As we know in the states, vanity takes no vacations, and beauty always defies logic.

I was so excited to report back to you on how lucky they were in the Czech Republic to be so fit, and how the lack of processed food and walking made all the difference.  But I was wrong.  Dead wrong some might say.  It turns out that the meeting was held in Prague because the Czech republic is the heaviest country in Europe.  Even though there were minimal if any processed foods within my reach in the city, on the outskirts, the western influence on diet was everywhere.

So it turns out that the real story here is:  what happens to a post-soviet block country once they gain their freedom and start adopting the western way of life? The answer is: adult obesity rates at 28.7% (they were 15% in 2002), childhood obesity rates at 23% for boys/15% for girls, and a country trying to figure a way out of it.

The take-home point is: any country that embraces western culture with its fast food restaurants and processed food ends up with an obesity epidemic.  You add a lot of beer to it, and you find a country going from underweight to obese so fast it makes your head spin.  As I wrote this article, I realized I had the fortunate ability to compare the past to the present. In the city of Prague where people were active and had minimal access to processed foods, people were thin.  Outside the city, where processed foods and fast food were everywhere, obesity was pronounced.

Finally, here is my favorite photo from the trip. She has nothing to do with anything.  I just thought she was cute.  And there she stood, up in her window, likely full of stories, watching it all happen. 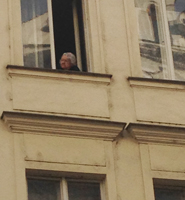