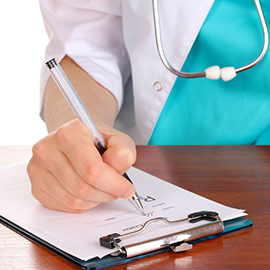 Obesity is one of the most significant public health problems in the United States. Today, over 75 percent of American adults are overweight and one-third are obese. Childhood obesity rates have more than tripled in the last 30 years, leaving one-third of American children either overweight or obese.

Obesity has far-reaching financial and health-related consequences. The problem has escalated to epidemic proportions in the last several decades and is difficult to reverse due to the many factors involved in its development. Still, with a little help and persistence, it is possible to overcome obesity and achieve better health and quality of life.

In essence, obesity means we have more body fat than is healthy. We primarily gain fat because we take in more calories than we can burn off through activity, but according to obesity specialist Dr. Wendy Scinta, it’s also about the types of calories we take in.

“We take in too much sugar, too many starches and simple carbs and not enough protein,” Dr. Scinta says. “That balance is really what has led this whole epidemic to skyrocket.”

For most people, obesity is caused by a combination of physical, behavioral and social factors such as:

How Does Obesity Affect Us?

Obesity is a medical and financial burden, with many consequences for individuals and society as a whole.

According to Dr. Scinta, obesity can cause serious health problems all over the body.

“It affects just about every part of the body,” Dr. Scinta says. “There are very few diseases that aren’t made worse by fat.”

Obesity puts us at risk of developing a number of chronic medical conditions often referred to as comorbid conditions or comorbidities.

The most frequently experienced obesity comorbidities are:

Obese individuals die up to 10 years sooner on average than normal weight people, largely due to conditions like these. It is estimated that children today will have a shorter lifespan than their parents by three to five years because of obesity.

The health risks of obesity lead to significantly higher healthcare spending. Annual healthcare costs are approximately $346 higher for overweight individuals and $2,845 higher for obese individuals. Adult obesity costs an estimated $147 billion each year, while childhood obesity costs $14 billion. It is estimated that these costs will reach $344 billion by 2018 if rates follow current trends, which will account for 21 percent of the nation’s direct healthcare spending.

How Is Obesity Treated?

According to Dr. Scinta, long-term weight loss requires lifelong behavioral changes, which can be difficult to make in an environment filled with the factors that led to weight gain in the first place. Though there are many commercial diets for weight loss, these often fail because they do not focus enough on nutrition and behavior.

Dr. Scinta believes that a medical approach can improve the weight loss process. However, primary care providers often do not have the extensive time needed to treat obesity, and training in the treatment of obesity is often lacking in a primary care setting. Because of this, Dr. Scinta recommends a comprehensive weight loss program designed by a physician who specializes in obesity.